The Deli Shop is the creation of my mum and dad, Isobel and Bruce Ross.

Bruce left school at 16 to work at the Mace supermarket. He enjoyed learning about the retail industry and soon worked his way up to manager but his dream was always to own his own shop. The Mace hired Isobel as a shop assistant and the two soon hit it off.

In 1985, they leased “The Fruit Basket” in Mid Street and sold fruit and veg as well as confectionery. The rent was high so Isobel ran it for the first year with one employee while Bruce continued to work at the Mace to keep some money rolling in.

A couple years later the shop next door became available and they leased it with the intention of turning both shops into one. The second was a pet shop and had to be run as such until they had permission to turn it into “The Deli Shop” where they decided to focus on cold meats, salads, cheeses and bakery goods. A little later, they started selling sandwiches due to a request from a few regulars at lunchtime. They’ve been our biggest seller ever since.

They both worked hard and the two shops soon proved to be a success. My dad did all the ordering and general managing while my mum took care of the accounts and increasing payroll. They made a good team, especially important as they soon had to juggle the responsibilities of the shop and the arrival of a son, Steven (me), in 1988.

Word of mouth was the only advertising that was needed and soon more and more customers were walking through their doors. Continued success led to an extension and merging of the two shops in 2000 as it became The Deli Shop as we have it today.

We’ve been described as “an Aladdin’s Cave” many times due to our diverse range of stock. You’re almost guaranteed to find something you’ve never seen anywhere else. This has developed organically over the years due to our customers. They have come in after a holiday or after finding a new recipe and ask if we’re able to source various products for them and we’ve always tried our best to do just that. Some of our now staple lines have started this way. Our buffets are another example of a customer request that has taken off. 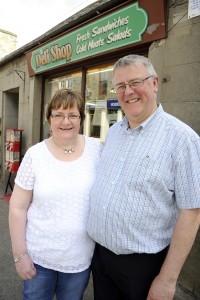 Our homemade produce, like our sandwich fillings and soup, have evolved through constant experimenting. Our meatloaf, for example, was an experiment by my dad during a quiet January. It was my granny’s recipe. Now the recipe has been tweaked and modified and we have around 15 different flavours.

Take a look at what we offer to get a better idea of what foodie delights you might find in store.

Our focus has always been on high quality food, local and independent produce, a friendly atmosphere and unusual stock not found anywhere else. We like to provide something different to your usual supermarket fare.

Nowadays, it’s become even more of a family business with me working here full time. The old man gets a break every so often and my mum, despite a stroke a few years ago, still comes in for an hour or two every day to find out the latest gossip and infect everyone with her contagious laugh.